The Detroit Red Wings are saddened to learn of the passing of Ted Lindsay, one of the most iconic players in franchise history and an integral figure off the ice who helped shape hockey for decades, who passed away today at the age of 93.

“Ted Lindsay was a Detroit Red Wings legend and icon, a hall of fame hockey player and Stanley Cup champion, and an even better person off the ice. He operated with a generous heart and was a great humanitarian, particularly to the Detroit Community and to young disadvantaged children. Ted was a great friend to my parents and to my entire family. He was endeared by legions of Detroit Red Wings fans and to all who played the great game of hockey. On behalf of Marian Ilitch and myself, our sincere condolences go out to his family and friends. While he will be sorely missed by us and many others, his positive impact to the game and to our community will live on.” – Christopher Ilitch, Holdings President and CEO and Red Wings Governor

Lindsay was born on July 29, 1925 to Bert and Maud Lindsay in Renfrew, Ontario, and was raised in Kirkland Lake, Ontario, as the youngest brother in a family of nine siblings. He left home at age 18 to play at St. Michael’s College, where he was discovered by a Red Wings scout and signed by general manager Jack Adams. In 1944-45, Lindsay made his debut for Detroit, the first of his 14 seasons with the Red Wings.

After producing just 17 points in his second NHL season, for the 1946-47 campaign Lindsay was placed on the left wing of a line centered by Sid Abel, joined on the right wing by rookie Gordie Howe, and saw his point total rise to 42. The trio would become the most prolific line in NHL history – the “Production Line” – and usher the Red Wings into their most successful decade, the 1950s. Lindsay, who was known for his tenacious and rugged play in the corners despite a 5-foot-8, 160-pound frame and his goal-scoring ability, would go on to make the NHL First All-Star Team eight times, the Second All-Star Team once and lead the NHL in goals in 1947-48 and in points in 1949-50. The Red Wings won the Stanley Cup in 1950, 1952, 1954 and 1955, with Lindsay serving as the team captain in the latter two championships. Lindsay also began the tradition of lifting the Stanley Cup once it was presented and skating it around the ice, as players had previously only collected the trophy and brought it into the team’s dressing room to begin the celebration.

Lindsay was traded to Chicago in 1957-58 and played three seasons with the Blackhawks before retiring, returning to skate one final season with the Red Wings in 1964-65. Famously known as “Terrible Ted,” he was NHL’s all-time leader in penalty minutes with 1,808 by the end of his playing career, in addition to collecting 379 goals, 472 assists and 851 points in 1,068 career games. Despite his nickname and aggressive on-ice disposition, Lindsay forever changed the sport, as he was instrumental in forming what became the NHL Players’ Association, battling to improve benefits and conditions for professional hockey players. In recognition of his efforts, the NHLPA renamed its annual trophy (previously called the Lester B. Pearson Award) the Ted Lindsay Award, presented to the league’s most outstanding player as voted on by NHLPA members. 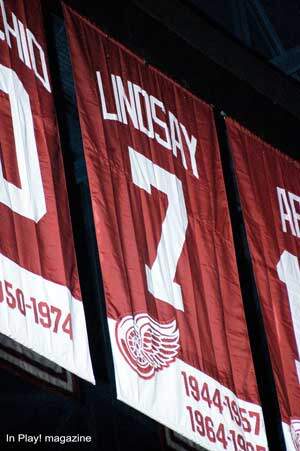 Upon retiring, Lindsay was inducted into the Hockey Hall of Fame in 1966 but declined to attend the ceremony as women and children were not permitted to come along, a rule the Hockey Hall of Fame changed the following year. He later served as the Red Wings’ general manager from 1976-80 and as head coach for parts of two seasons from 1979-81. Lindsay’s No. 7 was retired by the organization on Nov. 10, 1991. Lindsay remained active with the Red Wings organization beyond his playing and coaching days, and he was a fixture around the Red Wings dressing room. His time with the team was always revered and cherished. He founded The Ted Lindsay Foundation in 2001 to support autism research and educational programs.

“Ted was the most fearless hockey player of all-time, but his skill level could match up with any player from his era,” said Red Wings executive vice president and general manager Ken Holland. “The Red Wings organization would certainly not be held in the regard it is today if not for his contributions to four Stanley Cup championship teams and later as the team’s general manager. He was always a regular visitor to the Red Wings dressing room, and there was never a single player who didn’t go out of their way to introduce themselves and come away awed by the experience. I will treasure the many conversations we had over the past several decades and would like to offer my deepest sympathies to the Lindsay family.”

Lindsay was preceded in death by his wife, Joanne, and is survived by his children Blake, Lynn and Meredith, his stepdaughter Leslie, as well as six grandchildren and three great grandchildren.

Commissioner Bettman Statement on the Passing of Ted Lindsay

The National Hockey League mourns the passing and celebrates the incomparable life of the legendary Ted Lindsay. One of the game’s fiercest competitors during his 17-season NHL career, he was among its most beloved ambassadors throughout the more than five decades of service to hockey that followed his retirement. In Detroit, he was a civic icon.

What Lindsay lacked in physical stature, he possessed in intensity, desire and will to win. He played 1,068 NHL games for the Detroit Red Wings and Chicago Blackhawks, scoring 379 goals with 472 assists and 1,808 penalty minutes. He appeared in 11 All-Star Games and was named a First-Team All-Star eight times. He won the Art Ross Trophy as the League’s scoring leader in 1950 and, as a driving force on the dynastic Red Wings teams of the 1950s – including as the left wing on the famed Production Line – he won the Stanley Cup four times.

Named to the Hockey Hall of Fame in 1966, he had his No. 7 retired by the Red Wings in 1991 and was named one of the NHL’s Top 100 Players during the League’s Centennial Celebration in 2017. As influential off the ice as he was on the ice, Lindsay was instrumental in the formation of the NHL Players’ Association. In 2010, NHL players displayed their reverence for him by renaming their annual award for the most outstanding player the Ted Lindsay Award.

There was no one quite like Ted Lindsay. We send our condolences to Ted’s children Blake, Lynn and Meredith, his stepdaughter Leslie, his six grandchildren and his three great grandchildren and join them in marveling at his incredible life.