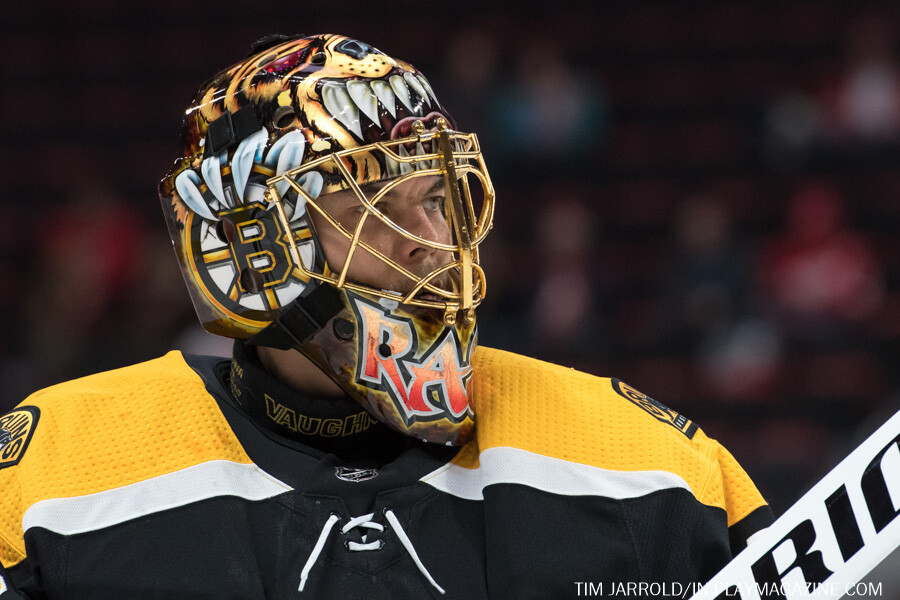 Brad Marchand (2-1—3) factored on three of four goals as the Bruins outshot the Maple Leafs 41-24 to force Game 7 in their First Round series. Boston won to survive elimination and force a Game 7 for the 11th time in franchise history and first since a Game 6 victory in the 2012 Conference Quarterfinals (4-3 OT W at WSH).

* The Bruins recorded a shot differential of +17 or higher in a game where they were facing elimination for the seventh time since 1955-56 and first since outshooting the Hurricanes 40-19 in Game 5 of the 2009 Conference Semifinals (+21).

* Boston has converted on seven of 16 power-play opportunities in the 2019 Stanley Cup Playoffs (43.7%), including going two-for-two in Game 6. The Bruins have scored more than seven power-play goals in a postseason series on eight prior occasions (since 1933-34), most recently in the 1991 Conference Finals (8 vs. PIT).

Tomas Hertl scored while shorthanded at 11:17 of the second overtime as the Sharks defeated the Golden Knights to force Game 7 in their First Round series. San Jose won to survive elimination and force a Game 7 for the third time in franchise history (also 1995 CQF vs. CGY and 2012 CSF vs. LAK).

* Hertl became the fifth player in franchise history to score an overtime goal in a game that required multiple overtimes and the second to do so in a contest where the Sharks faced elimination; he joined Ray Whitney in Game 7 of the 1995 Conference Quarterfinals (5-4 2OT W at CGY).

* Additionally, Hertl became the first player in NHL history to score a shorthanded winner in a game that required multiple overtimes. Only eight other players in League history have scored a shorthanded goal in the first overtime of a postseason game.

* Martin Jones made 58 saves to establish a franchise record for most in a postseason game, eclipsing the previous mark of 56 set by Wade Flaherty in Game 7 of the 1995 Conference Quarterfinals (5-4 2OT W at CGY). He also set a Sharks record for most saves in any game, besting the old benchmark of 57 set by Jeff Hackett on Dec. 26, 1992 (7-2 W vs. LAK).

* The Golden Knights, meanwhile, will contest their first Game 7 in franchise history. Vegas can become the 16th franchise in NHL history to win its first-ever Game 7 and second in as many years; they would join the Jets, who accomplished the feat in the 2018 Second Round (5-1 W at NSH).

* Washington enters Monday’s contest with the opportunity to advance past the First Round for the fifth consecutive year. The Capitals hold an all-time record of 20-32 in potential series-clinching games, including a 4-0 mark in 2018 en route to capturing the franchise’s first-ever Stanley Cup.

* Dallas, meanwhile, looks to earn its first playoff series win since a six-game triumph over Minnesota in the 2016 First Round. The Stars/North Stars hold an all-time record of 29-22 in potential series-clinching games, including a 15-8 mark on home ice.

* When trailing a best-of-seven series 3-2, the Hurricanes/Whalers have won to force Game 7 four times while going on to win the series on one of those occasions (2009 CQF vs. NJD). In the same scenario, the Predators have extended to a seventh and deciding game three times – winning once (2016 R1 vs. ANA).

Brent Burns of the San Jose Sharks, Mark Giordano of the Calgary Flames and Victor Hedman of the Tampa Bay Lightning are the three finalists for the 2018-19 James Norris Memorial Trophy, awarded “to the defense player who demonstrates throughout the season the greatest all-round ability in the position,” the National Hockey League announced today.

Members of the Professional Hockey Writers Association submitted ballots for the Norris Trophy at the conclusion of the regular season, with the top three vote-getters designated as finalists. The winner will be revealed Wednesday, June 19, during the 2019 NHL Awards™ presented by Bridgestone at Mandalay Bay Resort and Casino in Las Vegas.

Following are the finalists for the Norris Trophy, in alphabetical order:

Giordano enjoyed his most prolific campaign at age 35, posting career highs of 57 assists and 74 points in 78 games (17-57—74) to rank second among League defensemen in scoring and guide the Flames to their second-best regular season in franchise history. The Calgary captain topped all NHL skaters (defensemen and forwards) with a +39 rating, the best such mark by a Flames player since 1990-91 (Theo Fleury: +48, Al MacInnis: +42). Giordano also paced all blueliners and shared fourth place in the entire League with a career-high four shorthanded goals, the most by any defenseman since 1999-00 (Lidstrom: 4 w/ DET). The Toronto native and first-time Norris Trophy finalist is vying to become the first player in Flames history to capture the award; MacInnis finished second in voting in both 1989-90 and 1990-91, as did Dion Phaneuf in 2007-08.

The reigning Norris Trophy winner registered 12-42—54 in 70 games as the anchor of a Lightning defense that allowed the fifth-fewest goals in the League en route to tying the NHL record for wins in one season. Hedman topped Tampa Bay blueliners in average time on ice for the sixth consecutive season (22:46) while logging a +24 rating, tied for ninth among all League defensemen. He also scored 10-plus goals for the sixth straight year, tied for the longest such streak among NHL blueliners (w/ Burns, Giordano, Oliver Ekman-Larsson and Roman Josi). The 28-year-old Ornskoldsvik, Sweden, native is a Norris Trophy finalist for the third consecutive season; he is seeking to become the first back-to-back winner of the award since Lidstrom earned three straight from 2005-06 to 2007-08 (w/ DET).

The James Norris Memorial Trophy was presented in 1953 by the four children of the late James Norris in memory of the former owner-president of the Detroit Red Wings.